Posted on March 12, 2013 by herstorycalendar 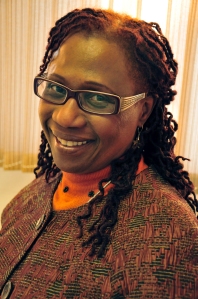 Reverend Sky Starr is a minister and therapist who helps families cope with violence in a troubled Toronto neighbourhood where guns and gangs have taken their toll on the community.

After witnessing the emotional impact of violence, she established the non-profit group, Out of Bounds, to offer counselling in schools and help young people deal with their unresolved grief.

“When there’s a shooting in the community, everybody is affected, even if they don’t know the people involved,” she says. “It’s not just the loss of life. It’s a loss of hopes and dreams and direction.” From Out of Bounds, she created Fathers Across Cultures to encourage young fathers, many of whom did not grow up with positive male role models, to celebrate their roles as fathers and mentors to the next generation of boys.

Recognizing that youth violence has a unique and often silent impact on the mothers, she also created Forgotten Mothers to support women who have lost children to gun violence. For her volunteer work, Sky was named one of 50 “Champions of Change” by CBC Television in 2010.

The official blog for Herstory: The Canadian Women's Calendar. An annual publication that celebrates notable Canadian women, Herstory is produced by the Saskatoon Women’s Calendar Collective (SWCC) and published by Coteau Books. Visit our website at www.herstorycalendar.com.
View all posts by herstorycalendar →
This entry was posted in Canada, Canadan, Organizations, Social Issues, Violence against women, Women and tagged Champions of Change, Fathers Across Cultures, Forgotten Mothers, Herstory 2013, impact of violence, Out of Bounds, Reverend Sky Starr, youth violence. Bookmark the permalink.
%d bloggers like this: