Posted on March 29, 2013 by herstorycalendar 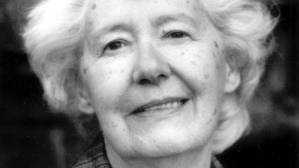 Elizabeth Brewster led a quiet life, but her poetry left a singular and insightful voice on the Canadian landscape. She was born in Chipman, NB, in 1922 and died in Saskatoon, SK, in December 2012. Elizabeth was proudly featured in Herstory 1981 and 1990.

An avid reader and writer, Elizabeth published her first poem at 12. She attended the University of New Brunswick and, with a scholarship from the Canadian Federation of University Women, attended Harvard University in Cambridge, Mass. Following graduate school at King’s College in London, England, she returned to Canada in the hopes of finding an academic teaching position. When none was offered, she became a librarian, earning a PhD along the way.

While working in Edmonton, she met the young writer Margaret Atwood, who encouraged Elizabeth to pursue her dream of teaching and publishing her poems. In 1972, she took a teaching position at the University of Saskatchewan, in Saskatoon, where she spent the rest of her life. She published more 20 books of poetry, fiction and autobiographical works, and she was a founding member of The Fiddlehead literary journal. Among her many awards and accolades was an honorary doctorate from the University of New Brunswick and appointment to the Order of Canada.

The official blog for Herstory: The Canadian Women's Calendar. An annual publication that celebrates notable Canadian women, Herstory is produced by the Saskatoon Women’s Calendar Collective (SWCC) and published by Coteau Books. Visit our website at www.herstorycalendar.com.
View all posts by herstorycalendar →
This entry was posted in Canadian, Poetry, Women and tagged Elizabeth Brewster, Herstory, Margaret Atwood, poetry, The Fiddlehead. Bookmark the permalink.
%d bloggers like this: