Posted on October 10, 2013 by herstorycalendar 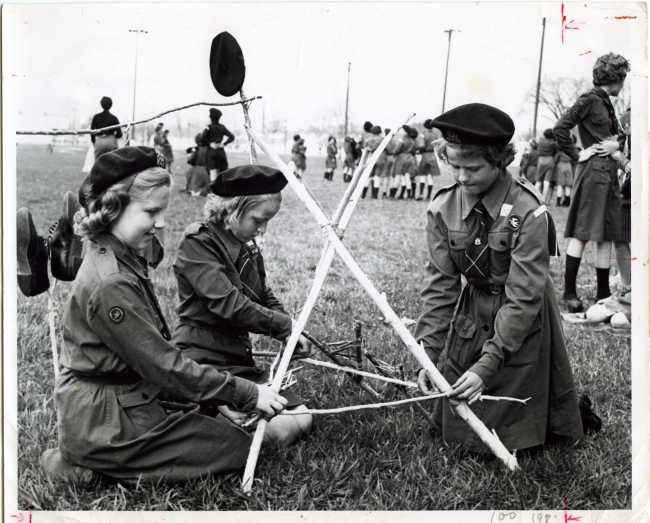 Each goal attained was like a new badge. Guiding taught me to see goals and achieve them.  – Roberta Bondar (astronaut and former Girl Guide), 1989.

Since 1910, the Girl Guides have helped millions of Canadian girls grow up, with confidence and courage, to make a positive difference in their lives and in their communities.

The Girl Guide movement began in London, England, in 1909 when a large number of girls showed up at a rally of the Boy Scouts. Scouting’s founder, Lord Robert Baden-Powell, was so impressed he asked his sister, Agnes, to create a program just for girls. The following year, the first Girl Guide Unit in Canada was formed in St. Catherine’s, Ontario, under the leadership of Mary Malcolmson.

Guiding spread quickly across the country. In 1912, a Dominion Council was formed to oversee Girl Guides in Canada with its first Chief Commissioner, Lady Mary Pellatt, wife of Toronto businessman Henry Pellatt, the builder of Toronto’s landmark Casa Loma. To the critics of this new movement empowering girls, Lady Pellatt responded: “The girls will be mothers of our citizens by-and-by. We must train them for womanhood and for citizenship. That is the purpose of the Movement. Who said it meant unsexing? It is not an imitation of the Boy Scout Movement; for there is no militarism in it. It is purely a women’s scheme.”1

Under Lady Pellatt’s encouragement, Girl Guides contributed to the war effort by raising funds, preparing bandages and knitting socks for Canadian soldiers and children in Europe. When Lady Pellatt died of heart failure in 1924, she was buried in her Girl Guide uniform.

The popular tradition of Girl Guide cookies began in Regina, Saskatchewan, in 1927 when Girl Guide Leader Christina Riepsamen baked cookies as a fundraiser for her daughter’s troupe. By 1929, Girl Guides cookies were being sold at the national headquarters and, by 1936, sales had expanded across the country. In 1992, Girl Guide cookies were rocketed into space with astronaut Roberta Bondar, herself a former Girl Guide.

The popularity of Guiding led to parallel movements for younger girls (Sparks and Brownies) and for older girls (Pathfinders and Rangers). “While our programs and activities have changed over the years to be relevant to girls, inspiring girl greatness has always remained the cornerstone of our organization.”2