From the archives: Pitseolak Ashoona (Herstory 1974)

Posted on March 6, 2014 by ashleighmattern 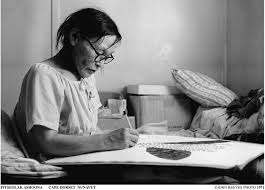 Featured in Herstory 1974, artist Pitseolak Ashoona was “part of one of the last generations of Inuit who grew up with the traditional lifestyles enjoyed by the North American Inuit since before 1000 BC.” (Wikipedia)

Pitseolak began drawing in the last two decades of her life, creating over 7,000 images. She had her first one-woman exhibition of prints and drawings in 1971, and was accepted into the Royal Canadian Academy of Arts in 1974. In 1977, she was awarded the Order of Canada. In 1993, her portrait was featured on a Canada Post stamp in commemoration of International Women’s Day.

In 1971, she told the story of her life to D. Eber, which was turned into an illustrated oral biography and later an National Film Board animated documentary, both called Pitseolak: Pictures Out of My Life. Pitseolak’s page in the 1974 issue of Herstory features the following quote from the book:

“I have lost the time when I was born but I am old now – my sons say maybe I am 70. (I draw) the things I have never seen, monsters and spirits, the old ways and things we did long ago before there were many white men. I know I have had an unusual life, being born in a skin tent and living to hear on the radio that two men have landed on the moon. To make prints is not easy. You must think first and this is hard to do. But I am happy doing the prints. After my husband died I felt very alone and unwanted; making prints is what has made me happiest since he died. I am going to keep on doing them until they tell me to stop. If no one tells me to stop, I shall make them as long as I am well. If I can, I’ll make them even after I’m dead.”

Pitseolak died in 1983. One of her daughters and three of her sons, as well as three of her grandchildren, followed in her footsteps as artists. Her granddaughter Annie Pootoogook was featured in Herstory 2010.

This entry was posted in Art, Canada, From the archives, Women and tagged Annie Pootoogook, art, artist, International Women's Day, Inuit, National Film Board, Order of Canada, Pitseolak Ashoona, Pitseolak: Pictures Out of My Life, Royal Canadian Academy of Arts. Bookmark the permalink.
%d bloggers like this: