From the archives: Violet McNaughton (Herstory 1974) 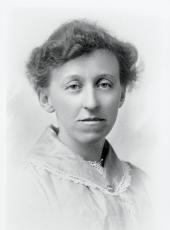 Violet McNaughton, via The Encyclopedia of Saskatchewan.

Violet McNaughton came to Canada in November 1909 to join her father, William Delamark Jackson, who was farming in Saskatchewan. For a year she lived in a sod hut on the prairie, sleeping at night in a room which served also as a granary.

Following her marriage to John McNaughton in 1910, she became involved in the Grain Growers Association, and believing that farm wives should share benefits of the organization, she formed, in 1914, the first Women’s Grain Growers’ Association and became its first president.

Two significant achievements of the farm women under her leadership were giving leadership to the movement for woman suffrage, and conducting a campaign for medical aid throughout the province, resulting in the establishment of the present union hospitals.

She was a well known and widely read newspaper columnist as women’s editor of the Western Producer and one of the original signatories of the charter which established the Progressive Party in Saskatchewan.

She was a Canadian delegate to the Congress at Prague held by the Women’s International League for Peace and Freedom and was called to Ottawa during the Great War to act in advisory capacity with respect to the conservation of Canada’s natural resources. As western vice-president of the Canadian Council of Immigration of Women and Children, she worked to establish women’s hostels throughout the dominion. About the same time she assisted with the organization of farm women in Alberta, Manitoba, and Ontario, and in 1918 became the first president of the Women’s Section of the Canadian Council of Agriculture.

In 1934, Violet McNaughton was honoured by King George V for her services to the welfare of rural women with the conferral of an Order of the British Empire.